This guide will help show you how to easily add Android Studio’s NDK to your previous projects. Specifically, it will show you the bare bones setup of the NDK, and get you writing native methods as quick as possible. This guide assumes you know your  way around Android Studio.

For a deeper explanation of the process, read here: https://developer.android.com/studio/projects/add-native-code.html

Versions used in the guide:

Unfortunately, this step will probably be the longest, unless you have already downloaded the NDK. Also a quick tip, be sure to occasionally check the download progress, as you may need handle an unexpected dialog. Nothing is like coming back to your computer 5 hours later, and finding the download has halted because it is waiting for you to answer a question. 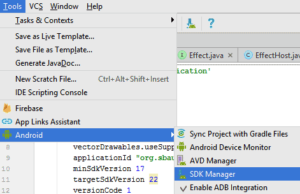 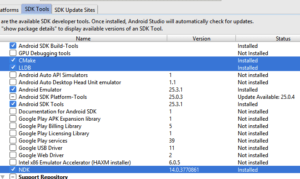 Once downloaded, the fastest way to configure a NDK project would be to create a new project and include native support from the setup wizard. However, if you have an older project and want to use it instead, configuration is still fairly simple.

To make a native library Navigate to Project > app > src > main and create a directory called “cpp”. After, create a new file called “native-lib.cpp” and place it in the “cpp” directory. Just to note, you can name the file anything you want, but for the sake of this guide it’s best to use the same name.

CMake is the tool that builds your native library, and needs a Cmake build script. To make the build script, navigate to the Project > app directory and create a text file called “CMakeLists.txt”. Add the following code to the file:

Link Gradle With Your Native Library

Open the module level Gradle build file located in Project > app > build.gradle, then add the code below, and re-sync. 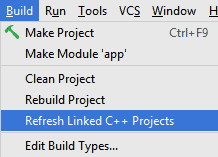 Now for the fun part, actually writing some code! Don’t get too excited just yet because native methods for Android are a bit trickier than in Java, and much less convenient. Hooray!

First, any Java class that accesses a native function needs to include that library. Add the following to your Java class:

Also, you must declare the native function prototypes, which are any functions you want to call from within your Java class. Add the following to your Java class:

Now you are ready to interact with native code, and can call the function just as you would in Java. For this function, the Java code would look something like this:

Here is the native code for the function shown above. Go to your .cpp file and add the following to it:

You’ll notice that the function name in the example is very long, which is required for your Java class to access it. Not all functions need to be like that, but it does for the ones that Java accesses. Basically the structure for most functions are as follows:

Keep in mind, only the class specified can get access to the function, so it is probably best to create a reusable Java class that handles all native functions to keep from having repeat code.

3 Replies to “Setting Up NDK In Android Studio”